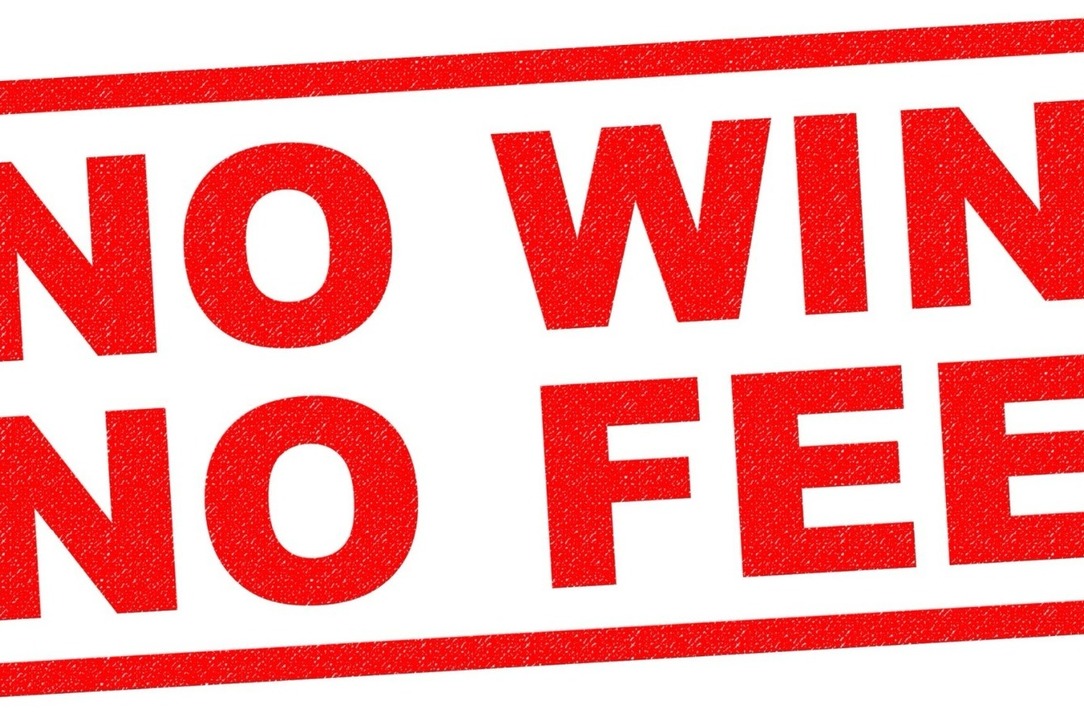 What Are No Win No Fee Conditional Fee Agreements?

Posted on 20th May 2020
A term that every client of our Personal Injury Compensation Claim Solicitors will come across is ‘Conditional Fee Agreement’ (CFA), known more commonly as “No Win, No Fee” agreements. What not as many people will be aware of, however, is the use of a CFA in other areas of law, such as that of Probate Disputes.

What is a Conditional Fee (No Win, No Fee) agreement?

A Conditional Fee Agreement is an agreement where, basically, your instructed solicitor will carry out work on your behalf to investigate your legal matter and, if the claim is unsuccessful, you won’t have to pay a penny. This helps people who wouldn’t necessarily be able to afford to pursue a claim, for example if they are injured, to get the legal help they need.

What can I use a No Win No Fee agreement for?

The most common legal matter which uses a No Win No Fee agreement is (as many of you will have heard on the television and radio) Personal Injury Compensation Claims. It doesn’t matter whether you were in an accident at work, a road traffic accident, or you were injured due to a medical professional’s negligence, your injury compensation claim could be dealt with using a No Win No Fee agreement.
The long and short of it is, if someone else caused your injuries or illness, you could make an injury compensation claim on a CFA. Here’s a list of the types of injuries our Personal Injury Solicitors could help you to make a claim for:
- Road Traffic Accidents
- Accidents and Injuries Abroad
- Medical Negligence (by a Doctor, GP, Dentist, or any other medical professional)
- Accidents and Injuries at work
- Slips, trips or falls (essentially, any injuries in public places)
- Faulty Product Claims
- Whiplash claims
- Public Transport Injuries
- Military Injuries
- Cosmetic Surgery Injuries
- Injuries caused by your Landlord’s negligence
However, what many people don’t realise is that No Win No Fee agreements can also be used for other types of legal matters. For example, in disputes arising under the Inheritance (Provision for Family and Dependants) Act 1975 (IPFDA 1975), also known as Will disputes, which you can read a little bit about below.

How do I know whether I can instruct a solicitor on a No Win No Fee agreement?

As an experienced team of Personal Injury Compensation Claim Solicitors, we’re confident in our abilities and would only take on injury compensation claims where we felt that you have a strong case with a good chance of success. This isn’t for our own benefit; this is to protect you from making a claim and investing time into a compensation claim if there is no (or little) chance of success.
You can discuss making a claim on a No Win No Fee agreement with an expert member of our team online, here.

Who pays the fees if I lose a No Win No Fee claim?

The point of the agreement is to protect you from a high bill if your matter isn’t successful, therefore you would not have to pay a penny.
There are insurance policies available, known as After the Event Insurance, which can be taken out by ourselves to cover the costs of court fees and other disbursements, if your claim is unsuccessful. If you lost your case, you would not have to pay the premium of this policy, either, so the No Win No Fee Agreement would still not cost you a penny!
The exception to this rule would be if the Court decided that you had acted dishonestly or maliciously in making your claim and if you breach the agreement. You can find a copy of a CFA agreement, here.
However, the chances of this are minimised greatly by our expert team of Personal Injury solicitors, by ensuring that we have all the facts before we commence any No Win No Fee agreement claim.

How much will my solicitor get paid if I win a No Win No Fee claim?

If your case is successful, the losing party will pay the costs. The amount that our team would charge the other side would depend on the nature of your claim, how much work has been carried out in order to win your case and the disbursements incurred. For example, a straightforward case which takes several months to conclude would cost less for the other side than a complex case with more severe injuries which takes several years to win.
When our team of Personal Injury Solicitors take on any compensation claim, we take on the risk that the claim will be unsuccessful and we won’t receive any payment for the work that we carry out. Therefore, when we are successful, we will often charge a success fee (which we will agree with you in advance).
Under the Legal Aid, Sentencing and Punishment of Offenders Act 2012 the payment of the success fee shifted from the losing side to the winning side. This means that, for any claims commenced after April 2013, any success fee is payable by our clients out of the money that they receive. Under this Act, the fee was capped at 25%.
Many Personal Injury Solicitors will take 25% regardless of the type of claim you have. However, at MG Legal, our team will assess each new matter on a case-by-case basis, and we will charge a success fee proportionate to the amount of risk and work involved with taking your case on.
Our Personal Injury Solicitors take cases on the basis of a success fee from 0% up to the full 25%; to find out what success fee we would charge for your injury compensation claim, contact our team online, here, or email injury@mglegal.co.uk.

Why choose MG Legal for a No Win No Fee injury compensation claim?

Our team have over 20 years’ experience in successfully settling Personal Injury compensation claims on behalf of our clients, and we’ve helped thousands of clients to receive compensation for their injuries, with a success rate of over 99%.
But, there’s no need to just take our word for it, you can read our reviews online to find out what our clients think of us.

No Win No Fee Claims Under Inheritance (Provision for Family and Dependants) Act 1975.

Can I use a No Win No Fee agreement to dispute a Will?

If you wish to dispute a Will, for example because there’s been no provisions made for you (and you don’t think this is correct), you may be able to make a claim under the Inheritance (Provision for Family and Dependants) Act 1975.
In some cases, you may be able to make certain aspects of your claim under a No Win No Fee agreement. For example, if the matter needs to go to Court, our team of local solicitors for Wills may be able to instruct counsel to attend the hearing on a No Win No Fee agreement. Like with personal injury compensation claims, this could mean that, if you’re unsuccessful, you wouldn’t have to pay the barrister a fee.

Would I have to pay a success fee if I win?

Until recently, it was generally accepted that, like with personal injury compensation claims, if a claimant was successful, they could only recover their base costs from the defendants to the litigation, and therefore they would need to pay any success fee out of the award they receive.
However, the obvious problem with this was that if the Court awarded the claimant £100,000.00 based on what they were entitled to from the Estate, they could then lose a chunk of this on the success fee, meaning that they effectively lose some of what should have been theirs in the first place.
This problem has been recently addressed by the Court in Bullock v Denton and anor (unreported; 15 April, 2020).
In Bullock, the dependant of the deceased made a claim against the Estate and, upon being successful, the Court considered the success fee liability that she may face under the Conditional Fee Agreement held with her solicitors. The agreement stood that her success fee was a 50% uplift on costs incurred which, as of June 2019 (almost a year before the trial), were around £24,000.00 plus VAT, with substantial costs incurred leading up to and during the trial.
HHJ Gosnell, presiding over the trial, awarded a figure of £25,000.00 by way of a contribution to the CFA, which was to be paid by the defendant. Whilst the Judge acknowledged that he was sympathetic to the defendant’s arguments against having to pay this fee under the law, he wanted to consider the reality of the situation, and how paying this success fee could disadvantage the claimant. The Judge therefore considered this fee as part of the claimant’s liabilities to allow her award to be increased.
So, if you’re considering making a claim under the Inheritance (Provision for Family and Dependants) Act 1975, there seems to be an increasing number of cases which would support the defendant making, at the least, a contribution towards the success fee that you may have to pay.
At the time of writing, our local solicitors for Wills are keeping an eye out for any updates and more cases which further clarify the position about payment of success fees; as always, we’ll keep you updated as more cases are decided by the Courts.

To discuss your Personal Injury Compensation claim, you can pop into your local office, email us to injury@mglegal.co.uk, contact us using the online chat below, or submit your details on our online enquiry form for a call back within one working hour.
If you want to discuss making a claim against your loved one’s Estate, email our team of local solicitors for Wills to wills@mglegal.co.uk, pop into your local office, or contact us online, here.
MG Legal - Your Local Solicitors
Tagged as: Best Personal Injury Solicitors, Local Solicitors for Wills, Your Local Solicitors
Share this post: